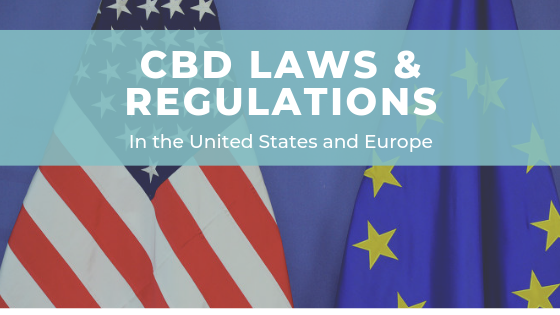 Cannabidiol (CBD) has been through a roller coaster of social shifts in the last century. Despite receiving recognition as a potential marvel of modern medicine; CBD is often stuck in a legal gray area. This ambiguity is due to CBDs direct, but complex relationship with cannabis. Since CBD is derived from cannabis, it’s often batched into laws and regulations typically meant to target marijuana and THC unfortunately.

However, more places around the world are learning to understand the critical distinction of recognizing CBD separately as its own substance. This is a brief summary of the recent progression of CBD laws and regulations in both the United States and parts of Europe.

CBD Laws and Regulations in USA

The old-school negative mentality towards cannabis from the reefer madness days is fading away from American culture. As the population learns and understands the truth about cannabis (and CBD) we begin to realize the previous perception was simply irrational.

Unfortunately, CBD is still tied up in regulations from the War on Drugs in the 70’s. But the United States shows positive signs for the future CBD in America. Recent progress at both the national and state level is promising for the acceptance of cannabidiol.

CBD Caught in the Crossfire of 1970 Controlled Substances Act

One of the most harmful events to the the hemp/CBD industry was getting roped up into the controlled substances act. President Nixon was attempting to show a strict and harsh stance against drugs. In doing so, he banned cannabis and its associated byproducts – including CBD. Many argue this event killed the hemp industry. But thankfully things are starting to make a comeback for the CBD and hemp industry in recent years.

One of the most notable steps forward for CBD was its inclusion in the Agricultural Act of 2014. Although the entire bill itself is massive, there is one special section that paved the path toward CBD legality.

Section 7607 of the Bill defines industrial hemp as distinct from marijuana, and authorizes state Departments of Agriculture and educational institutions to conduct research and initiate pilot programs.

It specifies that industrial hemp consists of any part of the cannabis sativa plant that possess no more than a tetrahydrocannabinol (THC) concentration of 0.3%.

Essentially, this bill allowed states to treat Hemp/CBD products completely separate from traditional marijuana. The only regulation was that the product must contain little to no THC in order to meet the qualifications.

If the 2014 bill was one small step forward for CBD, the 2018 was one giant leap. Under its more formal title; The Agriculture Improvem

ent Act of 2018 essentially dropped hemp and CBD products from the federal list of controlled substances.

Section 297A (p. 429) of the farm bill defines hemp as all parts of the plant less than 0.3% THC, including derivatives, extracts, and cannabinoids and it permits hemp production in all states and territories.

This bill also shifts the hemp industry into a more appropriate category of regulation. The hemp/CBD industry is now managed and supervised by the Department of Agriculture, rather than the Department of Justice. Retail and consumer CBD products, oils, topicals, and ingestibles are under FDA jurisdiction. Current, the FDA has not released an official position regarding cannabidiol. This is the reason why CBD products come with the standard disclaimer, These statements have not been evaluated by the FDA etc.

Always remember that the exact details and legal status of CBD is different for every state. Although the United States has made significant progress at the federal level, it’s critical to understand your states specific laws and regulations. But in most cases, you won’t have anything to worry about. CBD is becoming more openly accepted at both the social and legal level. Check out our shop category for CBD products in the USA.

CBD Laws and Regulations in Europe

European laws and regulations surrounding CBD are considerably complex and strict in some areas. While, other countries in Europe have very progressive and liberal policies towards CBD and hemp products. This will give a brief overview of some important details to know about CBD in Europe. It’s a great starting point, but the best advice is always to do your own research for your specific scenario and location. European countries have a much wider spectrum of acceptance and regulation.

The first hemp/CBD based law in the EU was put into effect in 1984. This regulation recognized hemp and CBD products as legitimate if they contained less than 0.5% THC. The industry and the population agreed this was fair and reasonable win for all parties involved. Eventually, the THC restrictions started tightening in the Europen Union.

By 1999, a series of new laws restricted hemp and CBD products to contain less than 0.2% THC. This was considered too strict by most people in the industry, and many cultivators/suppliers were burdened by the tightened restrictions. Many claim the restrictions gave an advantage to Asian and American companies required to meet less strict regulations.

Although the World Health Organization (WHO) is a global entity, it is a reliable source of research for many Eurpean countries and people.

In 2018, the WHO declared there are no public health risks or abuse potentials found in pure cannabidiol (CBD). Since then, many countries are revisiting their outdated policies regarding

The Europenan Commision (EC) recently updated guidelines to consider CBD and other cannabinoid products a novel food in some cases. The exact phrasing of what qualifies as novel is a little tricky though… A product qualifies if, Extracts of Cannabis sativa L in which cannabidiol (CBD) levels are higher than the CBD levels in the source Cannabis sativa L are novel in food

Basically, this means the CBD level of the final product cannot be way more than the original source. This makes products like pure CBD isolates considered a novel Food that must be approved by the novel food regulation.

In most cases, CBD products should be safely accessible somewhere near you in the world. Visit our CBD online shop to find the perfect product for you.